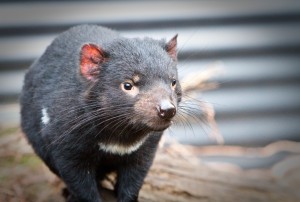 Biotechnology is rarely considered to be good for the environment. In fact, environmental campaigners frequently claim that genetically modified organisms represent a major threat to biodiversity and ecosystems. However, the study of the Tasmanian Devil Facial Tumour disease (DFTD) using genetic technologies is an example where biotechnology has been used to create a definite environmental benefit.

The Tasmanian Devil (Sarcophilius harrisi) is Australia’s largest surviving carnivore and endemic to the island of Tasmania. DFTD induces cancerous tumours on the face and inside the mouth of affected animals which die within months. The condition was first observed in north-eastern Tasmania in 1996. DFTD, like other cancers, is caused when mutations within a cell prompt it to switch from normal function into tumorous growth. Cancers are considered non-contagious as the tumour is contained within the body and is unable to spread to alternative hosts. Furthermore, the immune system of any alternative host would normally recognise any foreign tumour cells that managed to invade the body, and quickly kill them before the disease becomes established. However, the DFTD is exceptional in that it is readily transmitted between individuals of the same species, and this has resulted in the disease rapidly sweeping across the island and threatening the entire species with extinction.

In order to better understand the DFTD, an international team of scientists has sequenced the entire genome of the Tasmanian Devil and identified mutations underlying DFTD. The results were recently published in the scientific journal Cell. This biotechnological research surprisingly identified that none of the tumours originated in any of the hosts examined. Instead, they were able to trace them all back to one cancerous cell from within a female devil, possibly in the early 1990s. This radical and unusual tumour had developed the ability to jump from individual to individual in a uniquely contagious manner, so spreading the disease across the species.

Using the genetic sequence information, the researchers were able to discount the involvement of a virus in the transmission of DFTD. Instead they were able to identify a new and radical form of transmission. Devils often bite each other in the face during eating and feeding behaviours. During biting, fragments of tumour from an affected individual become implanted in an almost vampiric manner in a new and healthy individual.

The scientists also discovered that the DFTD tumour carries a mutation in a gene that plays a critical role in regulating the host’s immune reaction. From this, they concluded that the tumour cells are able to interfere with the host’s immune system immediately after implantation, The disrupted immune system is unable to kill the tumour, thereby ensuring the survival of the disease in the new individual.

The results of this study have provided valuable insight into the management of the DFTD and the conservation of the Tasmanian Devil. Because the condition is only transmitted through the bite from a diseased individual, the disease can be effectively controlled by quarantining healthy populations from diseased. The condition will then be naturally eliminated as diseased individuals die off from within the affected population. Such a policy has already been implemented with the Tasmanian Department of Primary Industries, Water and Environment who have been identifying and quarantining disease free populations within the island. Individuals from the protected population may then be re-introduced into the Tasmanian Devil’s former habitat once the disease threat has passed.

Despite the frequently cited threats that biotechnology poses to the environment, the application of gene sequencing technologies to the DFTD is an example of how biotechnology might be adopted to solve major environmental problems. In fact, the outcome of this gene sequencing project has contributed to a management plan that might yet save the Tasmanian Devil from extinction and conserve an important component of Australia’s unique biodiversity.

1 thought on “The Devil’s Technology”