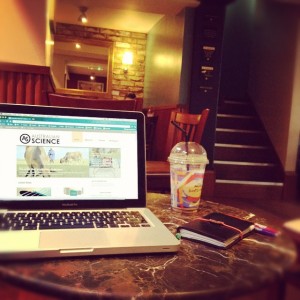 It’s been an interesting week for science news, and I’ve been lucky enough to be asked to give this week’s science picks! This made me spend a little while sipping contemplatively on a cup of vanilla iced coffee and wondering where to even start…

The articles I’ve selected are, of course, slanted towards my own (rather geeky) interests, but all the same I hope you find them all as fascinating as I did!

First up, the news that Star Trek style warp drives may actually be possible, at least in theory, made me exclaim “Oh wow!” out loud. Fortunately, people who spend any time with me are generally used to me talking to myself while staring at a computer screen…

Warp Drive May be More Feasible than Thought

From the vastness of space to life under the microscope, biologists have been debating for years whether or not viruses qualify as a form of life. The latest evidence is that they may indeed be a life form in their own right, and an old one at that!

They found that many of the most ancient protein folds in living organisms were present in the giant viruses, which “offers more evidence that viruses are embedded in the fabric of life,” Caetano-Anollés said.

Heritage Daily had a fascinating article about the archaeology of the future, and what precisely our distant descendents may one day think of us and the way we lived…

The Archaeology of the Future

The point is that most of what survives will not be determined by conscious decisions on our part. This may not be for want of trying, as shown by the current popularity of time capsules. The most impressive of these must be the KEO satellite, due to be launched in 2014 and to return to Earth 50,000 years later.

And speaking of what we know of the past, it’s been shown again and again that our primitive relatives, the neanderthals, were likely not the brainless savages they’re often depicted to be. Evidence suggests that neanderthals liked to collect bird feathers as ornaments.

“I think this is the tip of the iceberg,” said Prof Finlayson: “It is showing that Neanderthals simply expressed themselves in media other than cave walls. The last bastion of defence in favour of our superiority was cognition.” Neanderthals, he said, may have been “different”, but “their processes of thinking were obviously very similar”.

As the Curiosity rover settles into its new home in Gale Crater on our neighbouring planet, one small worry is growing in the backs of the minds of certain NASA scientists. Could a blunder on the part of some engineers lead to Curiosity contaminating the surface of Mars with Earth life?

John D. Rummel, a professor of biology at East Carolina University, said, partly in jest: “It will be a sad day for NASA if they do detect ice or water. That’s because the Curiosity project will most likely be told, ‘Gee, that’s nice. Now turn around.’ “

And finally, planet hunters are scouring the sky for exoplanets. Astrobiologists are hoping to soon be able to look into the atmospheres of those planets in search of life signs, in the form of certain molecules created by living organisms. But could they be fooled by those molecules coming from somewhere else?

One key gas astrobiologists looking for extraterrestrial life would concentrate on would be oxygen […] Another possibility would be methane, a colorless, odorless, flammable organic gas that microbes on Earth produce. Seeing both together in an exoplanet’s atmosphere might be an especially significant sign of life, since they would both ordinarily remove each other from the atmosphere without something like life to constantly replenish them.

Have a good weekend!