The thing I love the most about scientific discovery is that anyone can do it. Literally anyone could, tomorrow, turn over a stone or look at a seemingly empty spot in the night sky and find something which no human being has ever seen before. Or, perhaps more importantly, something which no one has full appreciated before.

And that’s exactly what happened to nine-year-old Saxon Thomas from Paradise Point in Queensland, Australia. While fishing in a canal in his backyard, Saxon found a jellyfish which he recognised as a box jellyfish. This was surprising at first, because no box jellies had previously been found in these waters. With a little help from his father, he carefully collected the fragile animal into a jar and sent it to Merrick Ekins, a marine expert at the Queensland Museum, to be identified.

But Ekins couldn’t identify it. It’s now been confirmed to actually be a new species, previously unknown to marine biologists. This has caused some consternation among locals who may now be thinking twice about swimming off the nearby coast. A few box jellyfish species are notorious for having extremely painful, and in some cases potentially fatal, stings.

Mercifully, this species is not the box jellyfish, otherwise known as chironex fleckeri, known for its lethal stings. This was the first species which Ekins checked, because if c. fleckeri was found around the coast of Queensland, it would be a big problem for local swimmers. Reassuringly, while the new jellyfish is a related species, it’s definitely not the same one.

Unfortunately though, for now at least, no one’s quite sure whether this new species is dangerous or not. Lacking the resources to investigate it further, local marine biologists explain that they won’t know how severe the stings this jelly can give are until someone is stung by one. Needless to say, no one’s particularly keen to find out voluntarily. While it’s very definitely capable of giving you a sting – this is, after all, how jellyfish catch their prey – it’s probably not life threatening. That said, Ekins cautions that there’s simply no way of knowing this for sure. Swimmers would be well advised to steer clear of them in any case.

Dangerous or otherwise, a new species is always an exciting find for biologists. Lisa Gershwin, director of Australian Marine Stinger Advisory services, shares in the excitement, while wondering what the new jellyfish species should be named. “I haven’t met Saxon yet but my intention is to one of these days when I meet him ask him what he would like it to be named,” she said, in keeping with the tradition that new species are named by whoever discovers it.

However, while this privilege is normally taken by the first scientist to describe the species, Gershwin thinks that Saxon Thomas should have the honour of naming the jellyfish he discovered. She explains, “I wanna give him the choice to name it because I think it’s such a wonderful thing that here’s these kids out playing with nature and going ‘hey wait, that’s different – what’s that?’ – and now we know. What a fabulous find.”

Fabulous indeed. And a reminder that it’s impossible to know when and where discoveries like this will be made next – or who might be there to make them! 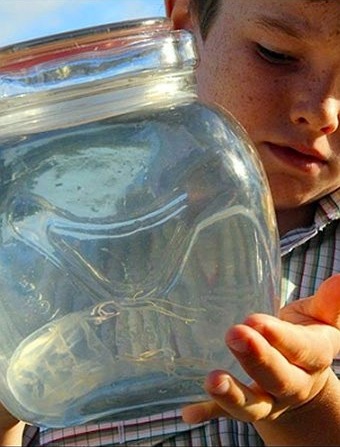 1 thought on “The Schoolchild who Discovered a New Jellyfish Species”