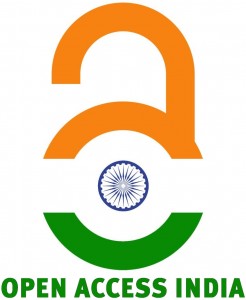 The ‘Open Access‘ movement which is built on the principle that the publicly funded research should be freely accessible online is gaining momentum around the world. In India, according to the Registry of Open Access Repositories and Directory of Open Access Repositories nearly 80 repositories have been registered since 2004 and three of them are listed in the top 200 of world repositories ranking. However, this momentum is slow in the field of agricultural sciences when compared with other sciences in India. Only few institutional repositories viz., Eprints@IARI, Eprints@CMFRI, E-Repository@IIHR, DSpice@IISR along with a thematic repository ‘OpenAGRI‘ have been established till date. Following the calls from Budapest Open Access Initiative and Berlin Declaration, M.S. Swaminathan Research Foundation, the Indian Academy of Sciences and the Indian National Science Academy took lead in Open Access activities in India. During the 93rd Indian Science Congress held in Hyderabad, a ‘Optimal National Open Access Policy for India‘ was proposed and  the National Knowledge Commission of India had recommended an Open Access mandate for publicly funded research.  As per the University Grants Commission‘s regulations (2009), a digital repository of Indian Electronic Theses and Dissertation ‘Shodhganga‘ was set up and made accessible to all.

However, the situation in the field of agricultural sciences is that earlier to the establishment of ‘Eprints@IARI’, an institutional repository of the Indian Agriculture Research Institute (IARI) in 2009 only the Journal of Tropical Agriculture from Kerala Agricultural University and  Karnataka Journal of Agricultural Sciences from University of Agricultural Sciences, Dharwad are the two Open Access Journals available. The National Agricultural Research System (NARS) comprising all the 97 ICAR institutes and 47 State Agricultural Universities (SAUs) is the largest system of the world. When the Council of Scientific and Industrial Research (CSIR) had adopted Open Access policy and made all its journals Open Access and has established institutional repositories for all its laboratories in 2009, the Indian Council of Agricultural Research (ICAR) in the year 2010, as a part of e-Publishing & Knowledge System  in Agricultural Research project under National Agriculture Innovation Project (NAIP), launched its two flagship journals on Open Journal Systems and declared them as Open Access. It is now offering hosting support to scholarly societies on its ‘epubs‘ platform for their journals. Under another NAIP project, a thesis repository, ‘KrishiPrabha‘ was established for NARS. However, unlike ‘Shodhganga’ it is only available to NARS institutions for online viewing and without full-text download permission. In the NARS, more than 100 scholarly societies are functioning and the use of the community developed tools & techniques for sharing and enriching the research information on the web by these societies is uncommon. Though under the NAIP, the entire NARS is being provided with the access to relevant corporate journals under the project Consortium for e-Resources in Agriculture. The access to the enormous outputs from Indian agricultural research which had aided in the advancement of agricultural science are being restricted for sharing openly with the world.

At this backdrop, seeing the slow pace of growing Open Access momentum in India, a group of agricultural researchers formed a voluntary group called ‘Open Access India’ (OAIndia) in July 2011 on ‘Facebook’ with an aim to take up the advocacy on ‘Open Access’ and to make agricultural information openly available, accessible and effectively used for farming in the country. Till date the group had grown to the membership of 1990 and to have a wider reach, OAIndia had created its page on Facebook, and groups on Linkedin, on Google groups and on openaccessweek.org. The group is listed in the Open Access Directory as one among the 15 groups formed on Facebook on Open Access.

The aims & objectives of ‘OAIndia’ are as follows:

In the NARS, researchers have generated extensive data and are stored in data books and project reports. Many a times, much of the data exists as unpublished (Grey Data) and once the researcher leaves the organization, the data is lost. Timely release of this data would help the researchers to carry forward the research for attaining the important scientific goals without ‘reinventing the wheel’ and in the light of recently approved National Data Sharing and Accessibility Policy for India, the discussion on the development of data standards, collection & analysis, sharing, archiving and rewarding policies assumes a considerable importance. To take forward its aims and objectives, the OAIndia had started consultations with various agencies working for the open knowledge to seek support for the creation of  community owned Open Repository for all the researchers to voluntarily archive data & information whose institution did not have any infrastructure for the same.