Take a moment to consider Neptune. The eighth planet in our solar system, the planet farthest from the Sun, and the third most massive planet in our solar system.  Also one of the least visited, and consequently one of the least understood planets in our solar system. Neptune was discovered in 1846.  Forty years later, in 1886, astronomer Sir Robert Ball wrote ‘Besides this brief sketch of the discovery of Neptune, we have little to tell with regard to this distant planet.  With a good telescope and a suitable magnifying power we can indeed see that Neptune has a disc, but no features on that disc can be identified’.

Unfortunately in the last 126 years not much has changed. Due to its enormous distance from Earth (~ 30 Astronomical Units) Neptune remains little more than a blurry disk in the eyepiece of the most powerful ground based telescopes.  In the past astronomers  studied Neptune by examining the planet as it occulted, or passed in front of the light of another object, usually a star, allowing scientists to calculate its diameter, chemical composition, and temperature.  The opportunity to study the gas giant only improved when Voyager flew by Neptune in 1989, and the Hubble Space Telescope was launched in 1990.

Voyager 2 launched in 1977, and reached Neptune on the 25th of August 1989 (click here for an impressive animation of the Voyager 2 flyby of Neptune). Although Voyager 2 began imaging the planet from about 35,000,000 million miles out, most of the data we have today is from a 24 hour period, during which Voyager 2 passed 4,500 kilometres above Neptune’s north pole at an eye watering 67,000 km per hour.  During the trip to Neptune Voyager gathered about 5 trillion bits of information or about .5 of a Terabyte of data. That doesn’t sound much now, but back in 1977 the 3 computers on the Voyager spacecraft had a combined memory of 68Kb, so Voyager sent back almost 15 million times more data that could be stored in it’s memory!!

Scientists were thrilled by the data from Voyager 2 and set to work learning as much as they could about the distant blue planet.  We learnt that Neptune is mostly composed of gas, is likely to have a rocky or metallic core, and that the majority of Netpune’s mass is hydrogen and helium, with traces of water, methane, ammonia, and other compounds.  Thanks to Voyager 2 we learnt an enormous amount about Neptune’s atmosphere, weather systems, magnetic field, moons, and ring system.  But that was over 30 years ago – and we now have more questions than answers. 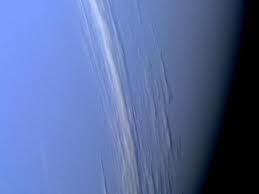 Images from Voyager 2 showed that the most obvious feature of Neptune is its stunning blue colour, the result of methane in the atmosphere.  Voyager 2 also revealed a more dynamic and turbulent atmosphere than anyone expected.  Neptune’s atmosphere consists of layers of clouds, banded features, and unexpected structures, including what was termed the Great Dark Spot (GDS). Neptune generates the strongest jet streams anywhere in the solar system, reaching speeds of up to 2,400 kms per hour. Voyager detected weak auroras, similar to those on Earth, but because of Neptune’s complex magnetic field, the auroras appear over wide regions of the planet, not just near the planet’s poles.  Despite what we do know, the structure and composition of Neptune’s atmosphere remains poorly understood. What accounts for the relatively high percentage of methane and lack of hydrogen and helium? What is the energy source responsible for powering the incredibly high speed winds and variable storm systems? What happened to the Great Dark Spot (observed by Voyager in 1989, but no where to be seen when Hubble observed the planet in 1994). Why is the temperature of Neptune’s thermosphere, a staggeringly high 750K (4760 degrees celsius)?  How can Neptune be so cold and distant from the Sun, and yet radiate so much energy?

Before Voyager 2, Neptune was thought to have 2 moons, Triton and Nereid. Voyager 2 discovered 6 new moons, and since Voyager’s visit, astronomers have discovered a further 5 moons.  Most of what we know of Triton, Neptune’s largest satellite, was acquired in a single encounter by the Voyager 2 spacecraft, which imaged about 40% of its surface.  If scientists were surprised by the images from Neptune, they were stunned by the images of Triton.  Triton, is an icy moon with a surface temperature of -235o, the coldest place known in the solar system.  Voyager’s images revealed a geologically active planet, geysers spewing nitrogen gas and dust particles high into the atmosphere, rocky outcrops, canyons, and plains of frozen methane.  Triton has a very thin nitrogen atmosphere with small amounts of methane, above a scarred and cracked surface.  Triton showed no fresh impact craters, an indication of an active planet experiencing periodic resurfacing.  But there’s still a lot to learn. Perhaps the most tantalising questions are about Neptune’s largest moon.  Was Triton formed near Neptune, or is it a captured object from the Kuiper belt?  What is the composition of Triton, and what causes the geologic activity, and has the distribution of the ice geysers changed dramatically since the Voyager flyby?  Will further analysis of Triton tell us more about the solar system, and our place in it?  Is there a sub surface ocean? Could Triton harbour life?

Earth-based observations during the 1980s suggested that there were a number of partial rings surrounding Neptune, and Voyager 2 discovered a system of equatorial, circular rings.  Although Voyager 2 gave us a good look at Neptune’s rings, the details of their composition is still uncertain, we don’t know how long they’ve been there, or even if they are stable.

Despite the valuable insights bought to us by the Voyager mission, the Hubble Space Telescope and other studies, clearly there are still a number of questions about Neptune that still need to be answered. Technology has advanced enormously since 1977 and any new mission would be well equipped to examine Neptune, its rings and a number of its moons.  A mission to Neptune would enable us to learn more about our outer solar system, and exploration of Triton may provide our best opportunity to examine the surface and atmosphere of a Kuiper Belt Object in orbit around a planet in our solar system.  In 2003 NASA proposed a Neptune Orbiter/Triton Explorer, however, that mission appears defunct.  Neither NASA nor ESA have any current or future plans for the exploration of Neptune.

I think that needs to change.

1 thought on “The Case for Neptune”